Posted at 09:12h in Classes by Joe Stanford
0 Likes
Share

Mental math – or mental calculation – really has very little to do with math. Well, I suppose it depends on how you look at math, but to me, mental math is mostly just a fun way to practice analytical thinking and problem solving – which, admittedly are each skills that play an important role in mathematics, but they also have pretty wide-ranging applications in just about all other walks of life too.

When I get the inevitable first year algebra question, “But Joe, when am I ever going to use this stuff?” My response is usually something like, “Every day, if you can.” Then, of course, I’ll go on to explain the importance of reasoned, logical thinking and problem solving, and the role that each play in decision-making – and the role that decision making plays in pretty much everything we do. I can’t make a very good case with most of my students that they’ll follow a career path that will ever require them to manipulate quadratic equations – they know better. They’ve seen their parents use the math they once learned in school, so seldom, that their skills have rusted to the point where they can’t really even offer much help with homework – and ”They get along fine without it, Joe.” It’s true, most adults get along just fine with little beyond the arithmetic required of a 4th grader. The everyday math most people use caps out with fractions and percentages, so why go further? My answer is, that training our minds to think and reason and solve problems and puzzles, allows us to better develop our skills for comprehending the world around us and – for that matter – our very existence itself. Seeing options, finding solutions, making decisions and choices, are all abilities each of us needs everyday – and mental math is a great way to exercise and develop these thought-related skills.

Now, where was I? Oh yeah, I was saying that mental math doesn’t really have much to do with math. What I mean by that is, that it has more to do with finding an easy way to solve a problem that seems impossible or at least really hard to do at first glance. A lot of mental calculation is simply a matter of knowing the tricks – and of course, being able to choose which tricks to use when, and how to use them.

A couple years ago, I was taking a break with my algebra class. The class flow usually allowed for fifteen or twenty minutes of gameplay after we had covered the day’s algebraic concept. Most often, that just meant practicing multiplication with numbers up to 60 – at the time, that was as far as my card decks went (these days we can play using cards all the way up to 108 – and down to negative 12!). The way this worked is that, I would put two randomly chosen numbered cards on the table and the students would compete to see who could accurately multiply them in their head the fastest. I had taught them to mentally distribute the numbers and add the results – which is my go to basic way to mentally calculate, it breaks one big hard problem into several smaller easier problems. As a trade-off, it requires the students to hold partial solutions in their heads while they calculate – but of course that’s exactly the kind of skill that helps our brains develop powerful problem-solving abilities. They knew a few tricks that could help them along the way, like rounding up to a multiple of ten and subtracting the difference, splitting one of the numbers in half and doubling the other, or rearranging the factors to create a series of easier problems. I was pretty accustomed to their capabilities and speeds, so I usually knew what to expect when I turned a couple new cards over.

But on this one day, I started to notice that Xinwan had gotten really fast with problems involving 11 and its multiples. I asked her how she’d gotten her answer – which is a pretty common question, because I encourage them to focus on method more than results – and she explained her trick, here it is: 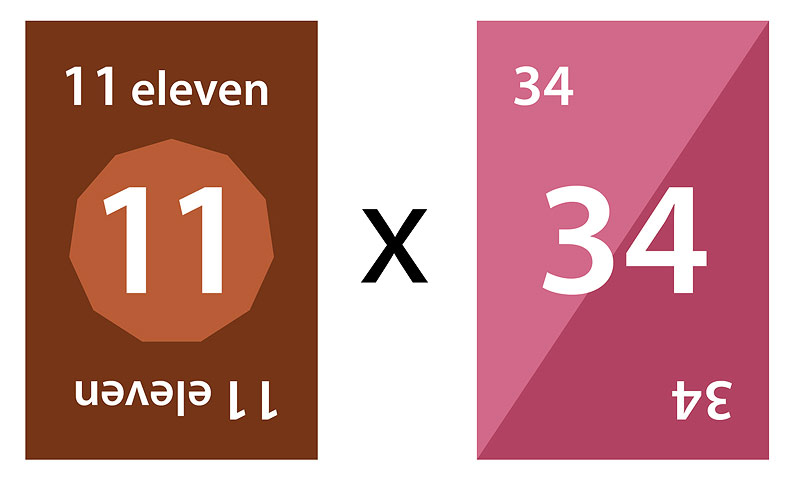 I had been using my old clunky and obvious method of multiplying by ten  and one and adding them, for instance (34 x 10) + (34 x 1) = 340 + 34 = 374. Both ways are pretty simple, but using her trick had dramatically improved Xinwan’s solution time – she was getting the answers almost as fast as I was, and was leaving her classmates far behind. Once she explained the trick – the others caught on pretty quickly. I was slower to embrace it, partly because I’m sometimes stuck in my ways, partly because I found my way just as fast – and faster when her trick caused me to carry a hundred over from the tens column in problems like 11 x 57 = 627. Using Xinwan’s trick, you think 5___7, but the digits add to 12, so you get 5_12_7, in which case, you have to carry the 1 and add it to the 5. That struck me – and still does, really – as being more trouble than just using my old method of 570 + 57 = 627.

Despite my initial reluctance, Xinwan’s speed convinced the rest of the class to adopt her method, as well as its applications to multiples of eleven. To do 22 x 43, you can do either 11 x 86 (doubling one and halving the other) and then use Xinwan’s trick, or you can do 11 x 43 using Xinwan’s trick, and then double it. The first way gives you 8_14_6, which becomes 946 once the one is carried, or the second way gives you 473 + 473 = 946, which some students might prefer.

I still tend to use my old reliable method, but I like using Xinwan’s trick to double check my answers, and sometimes just for fun. Xinwan’s trick is a real crowd-pleaser – much more popular than my boring old way. I even teach Xinwan’s trick to the younger students in my Mental Math 1 class, which has made Xinwan a bit of a mythic figure. Now, everybody seems to look forward to multiplying by eleven, and when I ask how they did it, they simply say, “I used Xinwan’s trick.”

*Of course this is an age-old trick, and can’t really be said to belong to Xinwan, but in my mind, it always will be hers, because while I had come across it before, I’d always ignored it, as having nothing to offer me. Xinwan’s use of it was a good reminder to me that even if I don’t have a use for a particular method, that doesn’t mean that it won’t be just the right solution a student needs – either to solve a problem, or to light the spark that excites them about math. I think one of the things that students find so appealing about this trick is that it holds a sense of magic for them – it seems so inexplicable, how can it really work? You know, of course, I won’t be able to resist explaining it though! Stay tuned. Update: Here it is – The Math behind Xinwan’s Trick!