I’ve been teaching with Vicky for about 15 years. Many years ago, I apparently mentioned to her that when I was in high school, I had been on the “In the Know” team. In the Know was a Columbus Ohio TV quiz game that pitted 4 person teams from local high schools against each other for the sake of fame, notoriety, and school prestige. It was a lot of fun – although a bit nerdy, at a time before nerdishness was cool. For some reason, Vicky latched onto this little tidbit of my backstory, and for years has, from time to time, tried to convince me to go on Jeopardy and put my trivial knowledge to some acquisitive use. Having overcome most of my inclinations towards fame and fortune early on however, I’ve always resisted her encouragements. 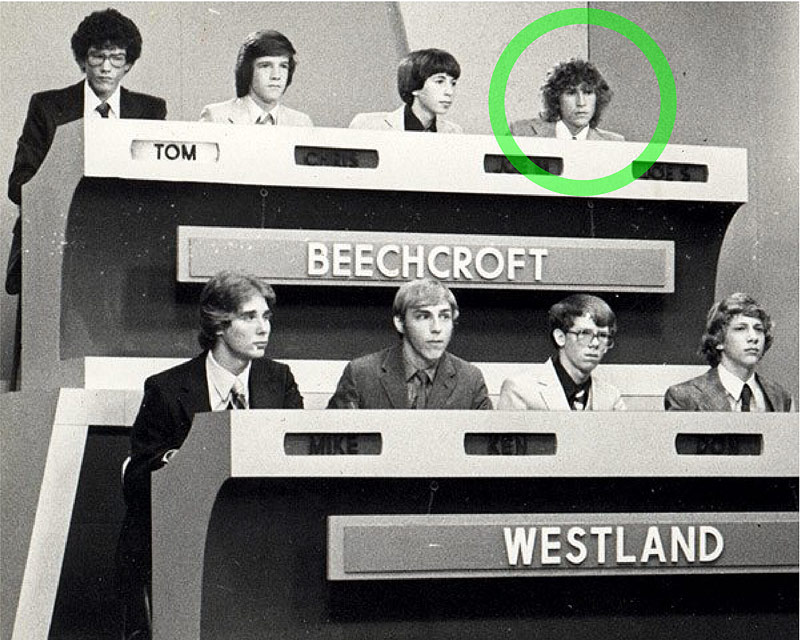 Here we are, circa 1980 (Fall of ’79? – Sophomore year) – I’m the one in the upper right, looking serious – in it to win it! That team from Westland didn’t stand a chance. actually, now that I think about it, they might’ve beaten us! Look at my hair! yeah, ok – I know – you already were!

Eventually, Vicky realized I wasn’t ever going to give in, and she said, “Well if you won’t go on Jeopardy, you should at least teach an In the Know class.” So I did.

I wrote a bunch of questions, I got some buzzers, we put it on the schedule, students signed up, and we had a lot of fun. It was great! After a couple years though, I noticed that while it worked well for a certain type of student – the kind that was outgoing and enjoyed some healthy, challenging competition – it sort of left out the kind of student that was a bit quieter and less concerned with “winning”. So I started to think of ways that the game could be more fun for everyone.

And that’s how Know What was born! Know What is a board game, and the wonderful thing about board games (well, one of the wonderful things anyway) is that players take turns. That way, nobody is racing to the answer and everybody gets a chance to take part. I picked a name – I knew I couldn’t use “In the Know”, because that was the other class – so I chose a favorite phrase of mine, “Know What”. People are always asking, “Know what?” when they want to tell you something. The name of my game isn’t a question, though – it’s a call to action. It says, “Know What!” It proclaims that “knowing what” is exactly what you should do – go out in the world and know what, so when somebody asks you, “know what?” you can simply reply, “Yes, I do!” That’s the power of knowledge! – or at least that’s the power of knowing what!

I like trivia, although I hardly think of it as being trivial – I lean towards the term, “general knowledge”. Years ago I had a big book with a couple thousand thin pages called the Lincoln Library of Essential Information, I think it was subtitled – What every American should know – which struck me as being kind of overly preachy/pushy patriotic, but I loved the book anyway. I’ve lost track of it, but I’ve still got an updated copy of E.D. Hirsch’s Dictionary of Cultural Literacy around, which is… well, probably even better, if I think about it. I know, these sorts of things seem less essential now that we have the internet. We have more information at our fingertips than we could ever possibly consume – just waiting to be accessed with a few taps of our fingertips on the device in our pockets – but I still like knowing stuff, and I think students do too. It’s empowering to acquire a wealth of knowledge – and unlike monetary riches, knowledge can be used over and over again.

One advantage to knowing things, as opposed to simply being able to look them up on Google when you need them, is what I think of as infosynthesis – being able to put information together and draw conclusions from it – having a whole bunch of dots and then being able to connect them, if you see what I mean. So, the idea behind “Know What” is that students can learn some general information about things like Science, History, Art, Geography, etc. and begin building a knowledge base – a foundation of understanding. And once that foundation grows strong enough, it can support any sort of edifice they might be inclined to build. Some say we are what we eat, but we might also be what we know!

Anyway, here’s the board: 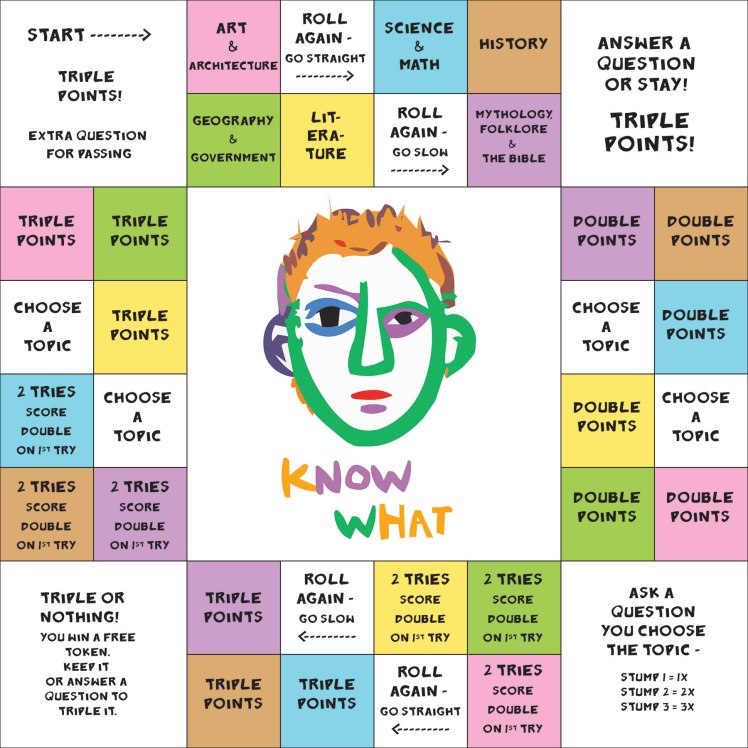 Players move clockwise around the board, advancing their game pieces up, down or ahead, but never diagonally or back. The colors designate topics. Players have an opportunity to score points by answering a question on their turn.

Do you want to try out some questions? Of course you do!

How did you do? Want some more? You can head on over to Quizlet and try the rest! Follow this link – https://quizlet.com/joestanford/folders/know-what-sets.