Posted at 14:20h in Classes by Joe Stanford
0 Likes
Share

I like to play games in my math classes. The other day, I was playing a game with my mental math class, when a student asked me about the design of my game cards. Most of the games I play in my math classes involve game cards that I began creating a few years ago. The cards each bear a number, along with its written name, as well as various visual hints or cues to elucidate its particular composition and characteristics.

For instance, The “8” (eight) is the approximate color of stop sign, and displays an octagon, as well as a blue square, which references an identical blue square that appears on the “4” card – an acknowledgement of the relationship of divisibility the two numbers possess. The background is two-toned – diagonally split, as are all of the even numbers to suggest the possibility that they could readily be sliced (divided) into two equal parts.

But what my student was asking the other day, was simply – how had I come up with the idea to design them this way at all? So I told her, that as far as I could remember, which wasn’t especially far, I’d had the idea that I could do something more math-friendly – or at least more suitable to my math game needs – than a conventional deck of playing cards, which is what I had been using, reasonably successfully, for a number of semesters.

“How did you start?” she asked.

“Well,” I told her, “I began with the number ‘1’. I chose a sort of subdued warm orangish color, and put a circle around it. I’m not certain why I chose that color or why I encircled it, but I did. I might’ve been thinking about the Sun, or the Moon – there’s only one of each, and both are round, you know. Or, I might’ve been thinking, that the addition of the circle emphasized the 1’s isolation – which of course is a particular characteristic of the number, if you think about it. Either way, or not at all – regardless of why – I do remember beginning with ‘1’. I’m certain, of that, at least.”

“Well, having completed the ‘1’,” I told her, “I confidently proceeded to the number ‘2,’ but got little further than its color, which was red – I can’t remember why… possibly because lips are red and we have two of them, but there might’ve been a different reason, or none at all – before getting stuck.”

“It couldn’t’ve been ‘none at all’ – there must’ve been some reason.” she theorized.

“Well, you’re probably right,” I confessed, “but I can’t remember it now, and anyway, the point is, that it was not a good sign, getting stuck at two. I had set a goal for myself to get all the way up to twelve and two is a long way from 12.”

“Exactly, or one-sixth, if you look at it differently, but back to my story – it was just getting good. So rather than give up – and that’s important, you don’t want to give up, or you’ll never get there – I left the ‘2’ in an uncompleted state and set about tackling the ‘3’. I went with yellow this time –

“That’s right, but I’m doing my best, and I’m almost to the good part. The ‘3’ gave me some guidance, you see, because with a number like three, there are options and possibilities. The 3 has a shape that goes with it – the triangle! So I put a pleasant and precise equilateral triangle around the three and felt very pleased with myself.”

“Was that it? Was that the breakthrough?”

“I thought it would be better.”

“Well, that triangle set the precedent for the rest, and took the weight off my shoulders that the “2” had put on them. After the ‘3,’ everything else came easy – a square for the four, a pentagon for the five and so on from there.

“Oh, that, well, somewhere along about the ‘4’ or the ‘6,’ I felt like I needed something extra and I thought of a diagonal line splitting the background into two tones – and that was that, from there on, all the evens got a split background color – problem solved.”

“Well, that seems like a bigger breakthrough than the triangle thingy.”

“Yeah, now that you mention it, I suppose it was – but either way, the important thing is that I persevered, and I got unstuck – see! there’s a lesson in there! a moral to the story! Stick with it and you’ll achieve success!”

“Well, er um…” I stammered, “sort of, if you think about it – but um, no – probably not, not really… you could probably make a better case for them having infinite sides than just one… and you know, there are two sides to every coin… and every story… hmmm, but that’s a different sort of – well, no – now that you mention it, the ‘1’ having that circle, doesn’t really make much sense – what with all the other numbers and their polygons… but a ‘1’ is unique you know – that’s the thing about ones, so I suppose I’ll just let it be different – just like each of us is.”

Here are those first 12 cards, so you can see how they turned out. 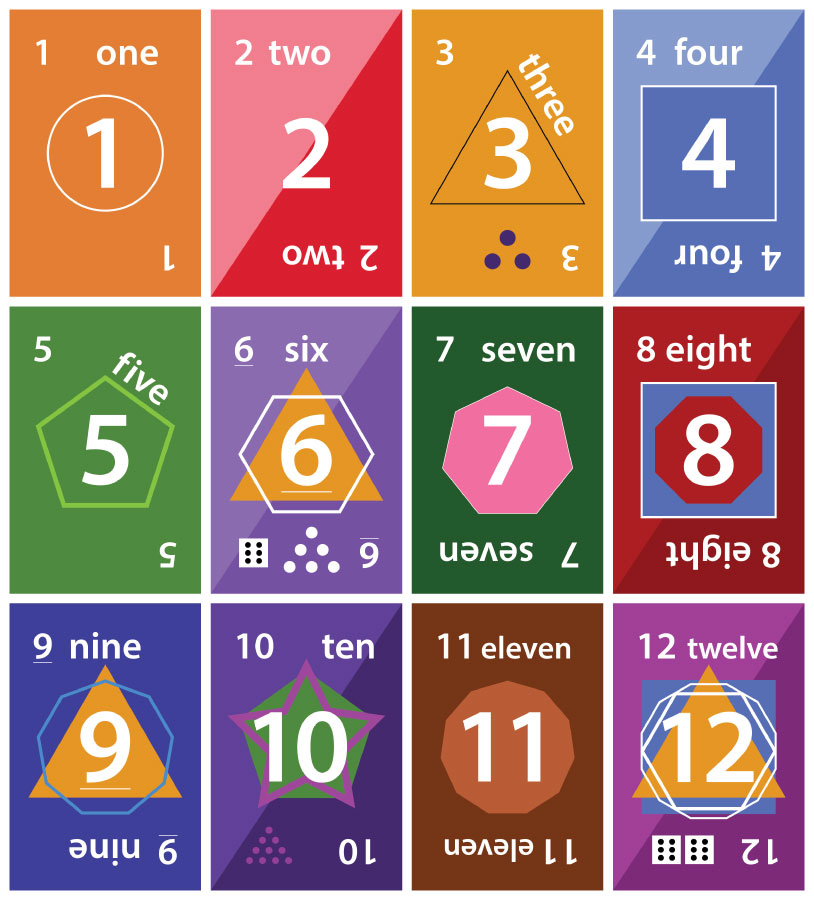