Posted at 11:55h in Classes by Joe Stanford
0 Likes
Share 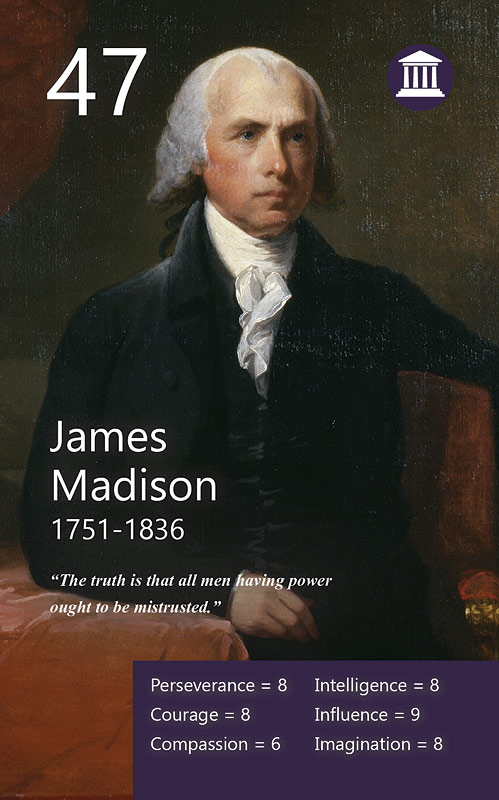 I think we learn more when we’re having fun. I don’t know whether or not we learn better through fun activities than through drudgery, but since we enjoy fun more than drudgery, I think we’re more inclined to spend our time doing the fun stuff – and spending the time on learning, has a big impact on how much we learn. Because of this – and because I like having fun – I like teaching with games. One of the great things about games – other than their funness – is that they give an immediate motivation to learn material that otherwise might only seem vaguely important. It might be difficult for a student to get very excited about James Madison, but if learning that Madison is known as “The Father of the Constitution,” and that he was the president of the United States during the War of 1812, helps her do well in a game, then it becomes more tangibly beneficial. I find that I’m much more inclined to want to learn information that will help me succeed in a game, than I am to want to learn something just to succeed on a test – and it seems most of my students feel that way too.

The first game of my own invention, that I began playing with my students, was History DNA. The idea for the game had been floating around in my head for a couple years, and I finally got around to suggesting it as a class several years ago when the Realm was just getting off the ground. In my preliminary vision, I thought of it as “The Ancestors Game”. The idea was that their would be a collection of historical figures that would become the players’ ancestors, and the players would inherit traits from them. These ancestors/historical figures would be depicted on cards, along with their listed trait rankings. Players would pit their ancestor cards against one another, dice would be rolled to determine the trait necessary to the circumstances, and the player who had inherited the given trait to the greatest degree would win the opportunity to answer a question, and if successful, claim the others’ cards.

Vicky almost immediately renamed it History DNA – I think she did that just as a way of abbreviating it as she listed it along with my other class ideas on a dry-erase board – but the name stuck. I swallowed my objection that it wasn’t quite accurate, acknowledging inwardly that what it might lack in science, it made up for in catchiness. It’s been History DNA ever since – and while the traits listed on the cards tend more towards temperament than physicality, who really knows to what extent these aspects of our personalities and character are inherited genetically rather than acquired through experience? Nature and nurture are always intricately intertwined, and our individual identities are certainly not blank at birth, so History DNA, it is.

Each semester in History DNA, we explore a theme. In the past we’ve looked at philosophers, mathematicians, poets, environmentalists, pacifists, authors, artists, and others. This semester we’ve been learning about the U.S. presidents. Each week we focus on one historical figure. We learn a little about them, and then we jump right in and play the game. Some of the students have been playing for years, and have a decided advantage over the others – at least at the beginning of each semester – their proficiency tends to urge new students on, and before too long the newcomers start learning answers, and the games become more closely contested.

Here are some of the questions from this semester, see how you do (scroll down for the answers):

Here are some examples of History DNA cards from the past and present.

These are two of the original cards from the first semester we ever played History DNA. The original cards had 12 traits rather than the 6 that I almost immediately switched over to. You’ll probably notice my mistake, that while 12 categories seems to fit with the possibilities of rolling two dice, the actual probability of rolling a 1 with two dice is zero. Live and learn! I used to just print these cards myself, and then laminate them with clear contact paper – I’ve gotten higher-tech since then. I had forgotten that I used to include some essential facts on the cards – I kind of like that. 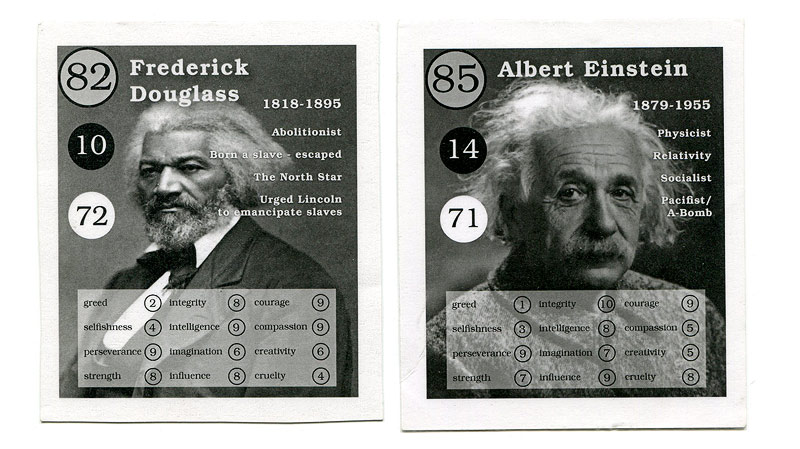 There were times back in the early days of History DNA, when I would fall behind on printing and laminating,and have to hand draw the weekly card. Here are two from a semester when we were learning about astro(and cosmo)nauts. 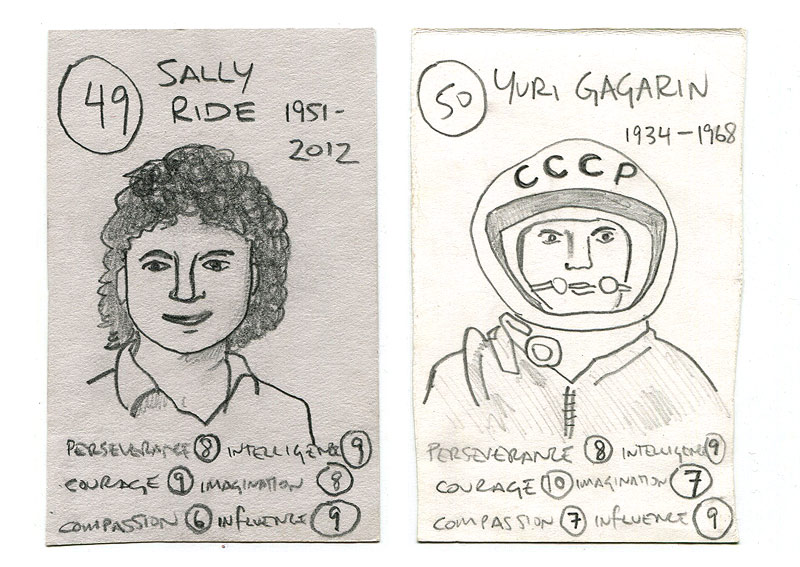 Eventually, I discovered that I could get the cards printed online for a fairly reasonable price – professionally printed color cards make the game seem much more legit! Here are the Yuri Gagarin and Sally Ride cards the way they look today! 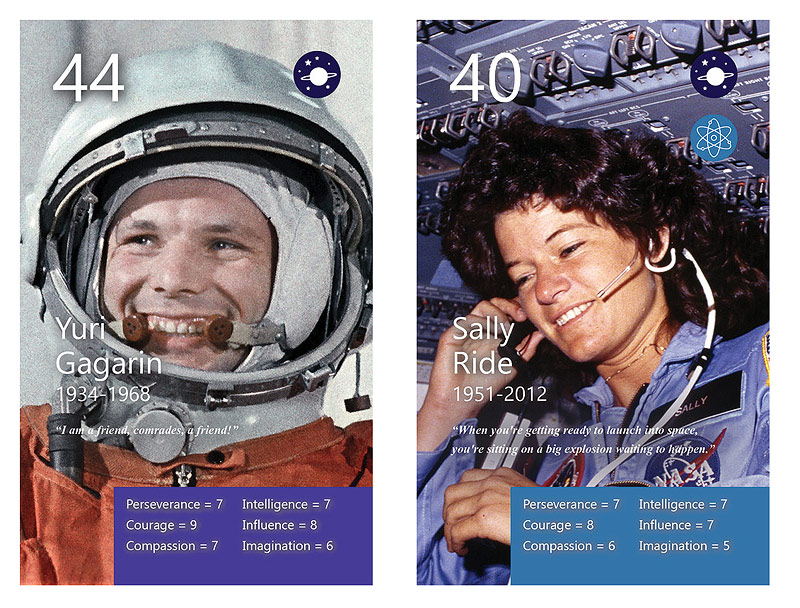 While I’m at it, I might as well show you what the Frederick Douglass and Albert Einstein cards look like these days – they’ve come a long way! 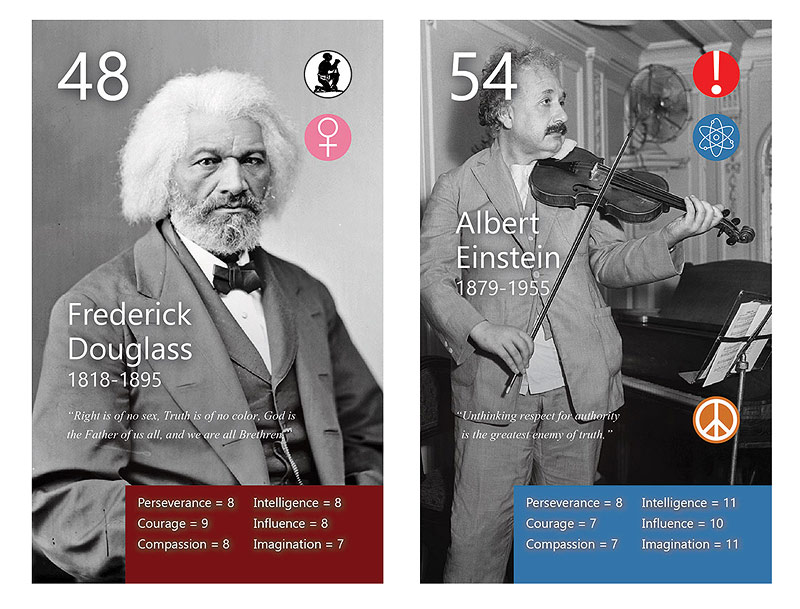