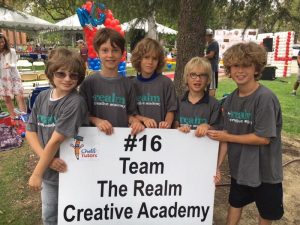 The Chess Tutors Grand Match Gala (GMG) is an invitation-only opportunity for students from various partner schools to test and measure their developing skills in full-fledged tournament play. Students have an opportunity to participate in a healthy competition that fosters camaraderie, good sportsmanship and an opportunity to gain valuable life experience in a safe and intellectually stimulating environment. Trophy winners and checkmate circle competitors from all of our top performing schools are invited to “go head to head” in this exciting “Battle of the Minds” (round robin) chess competition.

Here is what Chess Tutors Program Manager, Jeremiah Peisert, had to say about this year’s REALM victory:

It was an auspicious start for this small team to say the least. Five students from the REALM attended: Tate Hastings, Dar Klein, Donovan Eastwood, Sam Hastings and Sammy Katz.

They were going up against many much larger, more seasoned schools, many of whom brought teams of over 20 students to compete.  There were representatives from 24 schools all competing for the top prize: college scholarships.

The top three competitors from the REALM were Tate, Dar and Donovan.  Tate scored a perfect 12-0, Dar was close behind at 11-0 and Donovan scored a strong 3rd with a record of 10-1; all huge scores.  These young men were friends both at school and away, and their teamwork really shined.  Tate and Dar also attended 2-weeks of back-to-back Chess Tutors Summer Camp Extravaganza to prepare for their first GMG. Donovan also attended the first week of Summer Camp with Tate and Dar to help prepare himself and I think it’s no accident that their hard-work and preparation made such a stunning impact at the our 14th annual GMG hosted at the University of Southern California.

The school they were going up against in the final match hosted on our giant chess-set was Open Magnet Charter, a 3-time GMG champion school who has been either 1st or 2nd place the last five years in a row! The final match was between the top 2 scorers from each school: Tate and Dar vs John Dunbar and Noah Smith (a GMG veteran). It was an epic finale, and Tate and Dar rose victorious as the first-ever school to win the GMG in their rookie debut!

All five competitors from REALM will receive college scholarships at next year’s GMG, with Tate and Dar sharing a larger percentage for their performance and leadership.

It was an honor to be their coach and we wish them all the best. It wouldn’t surprise me to see these lads at the top again next year. 😉